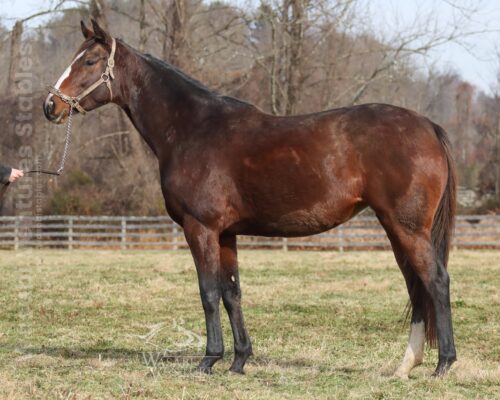 C’est Mardi won six of her 24 career starts, placing in another six, and earned a total of $109,339 while running from 3 through 6YO.  She scored three times on dirt (wet and fast) and three times on turf, at one mile and 1-1/16 miles.  Her versatility also carried over to her running style, as she won both on the front end and coming from as far back as 7th.

She is by the Horse of the Year and two-time Breeders’ Cup Classic winner Tiznow, who was also a leading sire and is now a very solid broodmare sire.  C’est Mardi is a half-sister to G3-winning 2YO Neversaidiwassweet and to the four-time black type-placed Ainsley, as well as to another winner and to the unraced dam of 2021 black-type earner My My Girl.

C’est Mardi was claimed during her racing career by our friends at Wasabi Ventures Stables, and earned her final three victories in their colors.  Bred for the first time in 2022, C’est Mardi is pregnant to Tacitus.

C’est Mardi wins at Monmouth in the slop