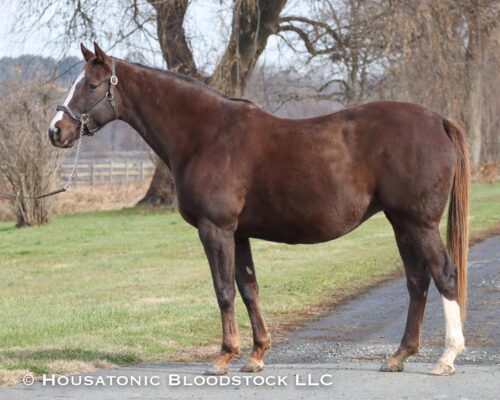 Faze the Nation was black-type runner who scored seven career victories and earned $226,295 while racing from 2YO through 5YO.  She was a winner at 2, 3 and 4, from 5-1/2 to 7 furlongs, on fast, muddy and sloppy dirt tracks, including a streak of four straight wins at 2 and 3.  She was a two-time allowance winner, and finished 3rd in the black-type Miss Disco Stakes at 3.

Faze the Nation is a half-sister to the 2022 2YO stakes winner Malibu Moonshine (unbeaten in her first two starts, including the Maryland Juvenile Filly Championship), to stakes-placed 2YO Maxine’s Tap Room, and to 5 other winners from all her dam’s foals to race.  Her ’18 half-brother Brokester (by Holy Boss) was a $100,000 2YO in-training purchase.

Faze the Nation’s dam, Sunday in Malibu, was a three-time winner of $119,558 by renowned sire and broodmare sire Malibu Moon, and Sunday in Malibu also picked up black-type when 2nd in the Sandpiper Stakes.  She is a half-sister to the stakes winner Retaliation, and this is also the female family of graded winners Fiscally Speaking, Greek Sun and Madame Pandit (the dam of G1 winner Mea Domina and second dam of G2 winner McCracken and G3 winner Four Graces).

Faze the Nation’s first foal is a 2020 filly by Mosler named Flamingo Faze who broke her maiden first time out at Colonial for trainer Phil Schoenthal and picked up black-type in her second start when she finished 3rd in the Rosie’s Stakes there in September of her 2YO season!  Faze the Nation has a Super Ninety Nine yearling filly, but unfortunately, her 2022 filly by Friesan Fire died.

Faze the Nation is pregnant to promising young Maryland stallion Blofeld for 2023.  She will be bred back to the G1 Dubai World Cup winner Mystic Guide for 2024.

You can check out more photos of Faze the Nation here.

Faze the Nation breaks her maiden at 2YO

Faze the Nation wins her second in a row

Faze the Nation wins her third in a row

Faze the Nation wins her fourth in a row