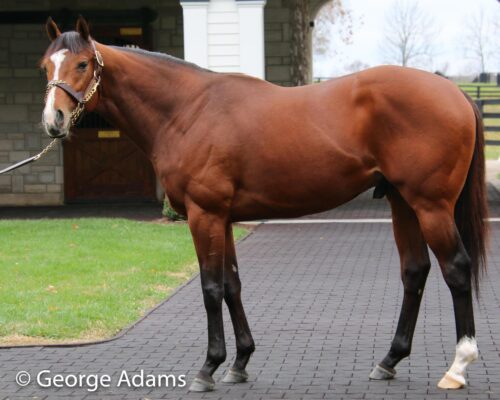 Gormley (by Malibu Moon out of Race to Urga, by Bernstein) was a G1 winner at both 2 and 3YO and a millionaire, and is one of the top sons of the high class and recently-deceased sire Malibu Moon.  His first crop of 2YOs contained 2021 G2 Saratoga Special winning juvenile High Oak.  He stands at Spendthrift Farm in Kentucky.

A debut winner first-time out sprinting at Del Mar, Gormley stepped right up to G1 company for his second start when he took the 1-1/16-mile FrontRunner Stakes wire-to-wire by 3 lengths over the likes of Klimt and Straight Fire.  Unplaced with a troubled trip in the G1 Breeders’ Cup Juvenile to close out his 2YO season, Gormley returned at 3 to take the G3 Sham Stakes and the G1 Santa Anita Derby (over 12 others) on his way to the Kentucky Derby.  He retired at the end of his sophomore season with 4 wins in 9 starts and over $1 million in earnings.

From the classic, dirt-centric, A.P. Indy sire-line, Gormley’s dam Race To Urga comes from a more international and turf-oriented family.  Race To Urga was herself a turf stakes winner by the Storm Cat son Bernstein and is out of a French classic-placed daughter of French classic winner Kingmambo.  Her next dam is by the turf champion Strawberry Road, while her third dam is the turf champion Estrapade.

So Gormley is the product of a blend of classic lines that have excelled on both turf and dirt.  He was well-supported during his first three years at stud, and after his first crop 2YOs sold like hot cakes early in 2021 (before they went on and ran effectively later that year), he covered another big book in 2021 (foals of ’22) which should keep him relevant going forward, as well.