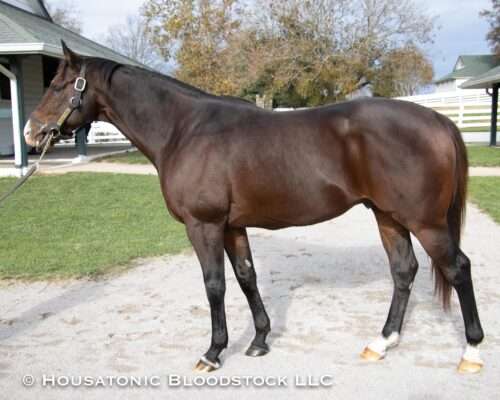 Higher Power (by Medaglia d’Oro out of Alternate, by Seattle Slew) was a top class racehorse with a top-class pedigree, and now will attempt to emulate his half-brother Alternation as a successful sire — we love his chances.

Originally campaigned as a homebred for Pin Oak Stud, Higher Power broke his maiden in his second start at 2YO when stretched to a mile, then returned to take an Oaklawn allowance in his 3YO debut over New York Central.  He finished 3rd later that spring in Oaklawn’s Northern Spur Stakes.  As a 4YO, Higher Power took a Fair Grounds allowance before selling at auction for $250,000 to David Ingordo for Hronis Racing.  On the West Coast, Higher Power captured a mile turf allowance and finished a close 2nd in the grassy Wickerr Stakes, before his breakthrough performance in the G1 Pacific Classic when — stretched to the classic distance of 1-1/4 miles — he romped home 5 lengths clear and earned a 107 Beyer Speed Figure.  On the board thereafter in the Grade 1 Breeders’ Cup Classic, Awesome Again Stakes, Gold Cup at Santa Anita, and the Grade 2 San Diego Handicap, Higher Power heads to stud in 2021 at Darby Dan Farm with a record of (20) 5-2-7, $1,594,648.

As mentioned, he’s a half-brother to the multiple graded stakes winner Alternation, who is the sire of G1 Kentucky Oaks winner Serengeti Empress among his eight stakes winners so far.  Their dam, Alternate, is a half-sister to Canadian Horse of the Year and successful sire Peaks and Valleys, and the Grade 1 winner and veteran sire Broken Vow is also a member of this female family.

Higher Power’s sire, Medaglia d’Oro, is one of the top stallions in the country these days, both on the track and in the sales ring.  He is also a rising sire-of-sires with the likes of Violence, Golden Lad, Warrior’s Reward and Fast Anna already successful with their runners, and Astern, Bolt d’Oro, Enticed, etc, to come in the next few years.