This spring we will be breeding our new acquisition, Winning Bet, to one of the most impressive physical specimens that we have seen in our visits to Kentucky stud farms:  the brilliant, unbeaten Australian Champion 2-year-old Vancouver.  Winning Bet will be a member of Vancouver’s first Northern Hemisphere book of mares. 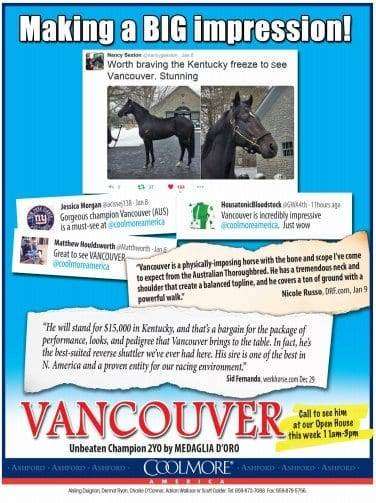 After being purchased by legendary “Lady Trainer” Gai Waterhouse for A$185,000 as a yearling, Vancouver began his racing career in October of his 2-year-old season (but as a Southern Hemisphere-bred, that corresponds to April for us), with a TDN Rising Star-worthy victory in the prestigious Breeders Plate over 5 furlongs, with his final time of :57.58 constituting the fastest for the event in eight years.  He stepped up to 5-1/2 furlongs for the Group 3 Canonbury Stakes next time out and scored impressively again, before cementing his status as the leading juvenile colt in Australia with a victory in the Group 2 Todman Stakes at 6 furlongs.

Vancouver’s win in the Todman made him the hot favorite for the world’s richest juvenile race, the A$3.5 million Golden Slipper Stakes at Rosehill two weeks after the Todman, and he did not disappoint – overcoming the extreme outside post position in the large field to win going away at the finish of the 6 furlong event and close out his championship juvenile campaign a perfect four-for-four.  Waterhouse was full of praise for the “dominant” Vancouver, and continued to compare him to her former 2-year-old Triple Crown winner Pierro.

Vancouver returned in the first month of his 3-year-old season to win a “barrier trial” at Randwick impressively over older horses, but unfortunately could only manage 4th in his lone official start of that campaign.  Shortly thereafter, and with Coolmore having previously purchased a controlling interest in the horse for an amount that made him the most expensive Golden Slipper winner ever, he was shipped to Ballydoyle in Ireland in order to target the Group 1 Commonwealth Cup at Royal Ascot for Aidan O’Brien.  But while O’Brien was always full of praise for the horse, a poor blood test kept him from ever racing in Europe, and he was retired to stud in Australia without running again.

Although Vancouver did all of his running on turf in Australia, he is actually a son of one of the leading North American stallions in Medaglia d’Oro, who campaigned exclusively on dirt and has thrown predominantly dirt horses in this hemisphere.  Along with the top fillies Rachel Alexandra and Songbird, Medaglia d’Oro has been responsible for Grade 1-winning colts like Violence, Warrior’s Reward and Mshawish, all of whom are now at stud in Kentucky.  Although only Warrior’s Reward has foals old enough to race (he’s responsible for a half-dozen stakes winners from his first couple of crops after getting off to a very hot start with his first juvenile runners), Violence will have his first 2-year-olds running in 2017, and they sold like people expect them to be the real deal.

Vancouver is an absolutely outstanding individual that very much resembles Medaglia d’Oro, with both being tall, strong horses with plenty of bone and bulk, plus a fabulous shoulder and neck.  It is perhaps that much more surprising, then, that Vancouver appeared to take more after his broodmare side in terms of his speed, precocity, and turf predilection, rather than in the progressive, classically-inclined mold of most Medaglia d’Oro offspring.   Vancouver’s dam, the Danehill mare Skates, has produced an additional Group 1 winner in Australia, and his second dam, Skating, was a multiple Group 1-winning Australian sprinter.  It is worth noting that Vancouver is bred on an extension of the extremely successful Sadler’s Wells/Danehill cross, with Sadler’s Wells being the grandsire of Medaglia d’Oro.

Mating Winning Bet with Vancouver will result in a foal that is inbred 5x5x4 to Northern Dancer (plus Winning Bet herself has Mr. Prospector appearing 4×2 in her pedigree). The TrueNicks rating for this match is a “C+” based on the cross of Medaglia d’Oro and his sons over Northern Dancer-line mares.  In addition to Vancouver himself, Grade 1 winner Coffee Clique is also bred on this pattern.  Beyond that average nick rating, though, there are reasons to think this match has real potential:  Winning Bet is out of a daughter of Mr. Prospector (Medaglia d’Oro over Mr. P results in an “A” TrueNick), while her sire, Dixie Union, is out of a mare by Seattle Slew’s son Capote (Medaglia d’Oro over Capote is an “A++”).

Winning Bet’s female family has had success with runners that contain genetic similarities to this match, as well:  Eclipse Champion Heavenly Prize is out of a Nijinsky half-sister to Winning Bet’s dam Fantastic Find, and Heavenly Prize threw three stakes winners by Northern Dancer-line stallions, including Cosmic by El Prado (sire of Medaglia d’Oro); while Dancing All Night, another Nijinsky half-sister to Fantastic Find, is the granddam of stakes winner Gung Ho, by El Prado’s son Kitten’s Joy.

Physically this match makes a lot of sense as well.  Winning Bet is a well-balanced mare with a very strong neck and shoulder, though she is not as tall and leggy as Vancouver is.  Hopefully the foal will inherit their strong-bodied physiques, with more of Vancouver’s height.