One of our favorites at the 2017 Keeneland September Sale, when he was simply known as “Hip 109,” was a colt by War Front out of Visions of Clarity, by Sadler’s Wells.  Now known as War of Will, he’s our pick in tomorrow’s Kentucky Derby off of a 15/1 morning-line. 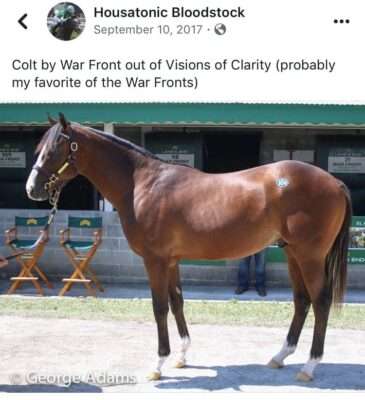 War of Will started his career with four straight turf tries, including when he finished 2nd in the G1 Summer Stakes in just his second start and as a maiden.  After a close 5th-place finish in the G1 Breeders’ Cup Juvenile Turf (still as a maiden), War of Will was finally tried on the dirt by trainer Mark Casse, at the insistence of owner Gary Barber.  And over a sloppy Churchill Downs surface (like the one he will quite possibly encounter tomorrow given the current weather and on-going forecast in Louisville), War of Will romped home five lengths clear to break his maiden in his 2-year-old finale.

Despite wide trips in each of his next two starts, the G3 LeComte and the G2 Risen Star both at the Fair Grounds, War of Will ran his win streak to three with another pair of open-length victories.  Favored again in the G2 Louisiana Derby most recently, War of Will lost his action behind shortly out of the gate — due in hindsight to a strained muscle, according to Casse — and struggled home 9th.

Obviously that is not an ideal final prep race for a race like the Derby, and then War of Will went and drew the #1 post position, which has been much-maligned in recent years because of the placement of the starting gate.  But with the (otherwise unfortunate) scratches of Omaha Beach and Haikal, War of Will now breaks from the second stall in the starting gate, which mitigates that latter concern somewhat.  And given his natural early speed and tractability, we think that Tyler Gaffalione will be able to get War of Will out quickly and work out a clear, ground-saving trip — if that ends up being on the lead, all the better.  Between the way the Derby has been run the last few years, when the winners have never been far out of it, and a projected sloppy track, when those not on the lead will have to deal with mud in their faces, we think there are worse places that War of Will could be early than in front.

As far as fitness goes, although War of Will hasn’t run a full race since February 16th, he earned a bullet in all three of his most recent workouts, including last week going a half-mile at Churchill Downs, and he has been earning rave reviews from those in attendance for his physical impression all week.

There is also no other horse in this Derby field who has more raceday experience than War of Will and his eight starts (only two others have even started that many times), and his last seven attempts have all come at a mile or longer — so he should have plenty of foundation underneath him, even with that less-than-ideal most recent race.

On pedigree, we don’t believe that War of Will should have any problems with 10 furlongs (something true of more in this year’s field than usual, it seems) — although War Front is typically referred to as a dirt sprinter, he did win a little stakes race going 1-1/16 miles during his career, and his offspring have included the G1 winner at more than 10 furlongs Declaration of War (who was also beaten a couple of heads in the G1 Breeders’ Cup Classic at this distance).  And War of Will gets plenty of stamina from his bottom-line:  his broodmare sire, Sadler’s Wells, sired two winners of the G1 Epsom Derby and is a renowned classic influence, while Riverman, the sire of War of Will’s second dam, sired a couple winners of the G1 Prix de l’Arc de Triomphe and is another classic-type influence.

For us, especially at anywhere near his 15/1 morning-line price, we love War of Will’s chances in this year’s Kentucky Derby.

Others worth mentioning and that we’ll be using in our wagers are the Bob Baffert trio of Game Winner, Improbable and Roadster — we’ve been high on the latter two all winter (having tickets on each from Pool 1 of the Kentucky Derby Future Wager), and it’s hard to knock Game Winner’s class and consistency.

We love Tacitus’s female family, and although he seems to lack some of the tactical ability it’s taken to win the Derby recently, he did overcome adversity in the G2 Wood Memorial victory.

And finally, we have to root for the Maryland-based Win Win Win and trainer Mike Trombetta and his team — we’ve had horses with Mike in the past and he’s an excellent trainer and a great guy, and we would love to see him take home a race of this caliber.