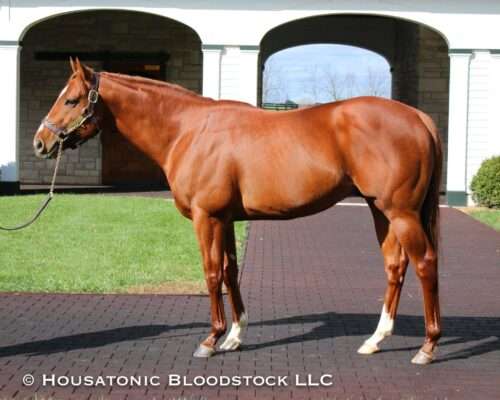 We believe that Jimmy Creed is the best value play in Kentucky again for the 2021 breeding season, and are excited to have recently secured breeding rights in him for a client.  We will also be recommending him heavily this spring for our other clients’ mares.

His physique earned Jimmy Creed a $900,000 yearling price tag, and he went on to be a grade 1-winning 3YO sprinter on the track.  He now has four crops of racing age, including his 2020 2YOs, and from those 259 foals of racing age, his 14 stakes winners is good for 5.4% of his foals, and he sports a 1.30 AEI compared to just a 1.01 CI, meaning he moves his mares way up.  His four graded winners include the top-class King Jack, who earned a 111 Beyer taking the G2 Gallant Bob at 6 furlongs on dirt, plus the likes of Casa Creed, who won the G2 National Museum of Racing HOF Stakes going a mile on turf and was G1-placed in 2020 at 5YO, as was Kanthaka (a dual-surface sprinter).

All of which, we think, adds up to Jimmy Creed being the top value stallion standing in Kentucky for 2021 at his advertised fee of $10,000.

EQB’s Patti Miller: “Jeff (Seder) and I have found that a disproportionate number of JIMMY CREED’s progeny have tested elite in ability according to our metrics. We think he will prove to be a powerful stallion in our industry.” 💪 #BreedWithCreed pic.twitter.com/yPdFugvZn0

King Jack, by Jimmy Creed, wins the G2 Gallant Bob with a 111 Beyer