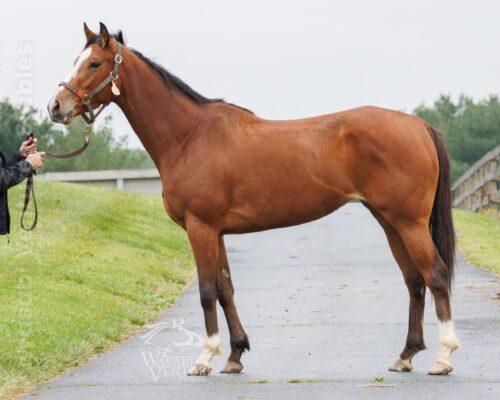 Although she didn’t live up to her illustrious pedigree on the racetrack, as a daughter of the record-setting stallion Into Mischief and half-sister to a graded stakes winner, Merry Mischief is more than deserving of a shot as a broodmare.  For her first mating, Merry Mischief will visit the proven young sire Dialed In in 2022.

Into Mischief has recently re-written the record books as a sire, repeatedly breaking his own single season earnings record as a General Sire, and also scoring multiple titles as the country’s Leading Juvenile Sire.  His top offspring include Authentic, Covfefe, Practical Joke, Goldencents, etc, and he did it the hard way, starting from a relatively minimal stud fee and less-than-stellar mares and climbing his way to the top by imparting speed and class to offspring on an incredibly regular basis.

Merry Mischief is out of the Deputy Minister mare Bandstand, who produced the romping G2 winner Freedom Child, a son of Malibu Moon and stakes-winning sire in Maryland.  Two other of Bandstand’s foals were winners on the track, as was she herself.

Bandstand is out of the G1-winning 2YO filly City Band, who also produced the stakes winners Weather Warning and Foolishly.  The latter is, in turn, the dam of stakes winner St Liams Halo, and another daughter of City Band is the dam of multiple G3 winner and sire American Lion.  City Band is a full-sister to Steel Band, the granddam of Eclipse Champion 2YO Shanghai Bobby (by Into Mischief’s sire Harlan’s Holiday), and the sisters trace in tail female to Dustwhirl, the dam of Whirlaway.  So this is a deep, precocious family with plenty of class, and we look forward to seeing what Merry Mischief produces in the breeding shed!