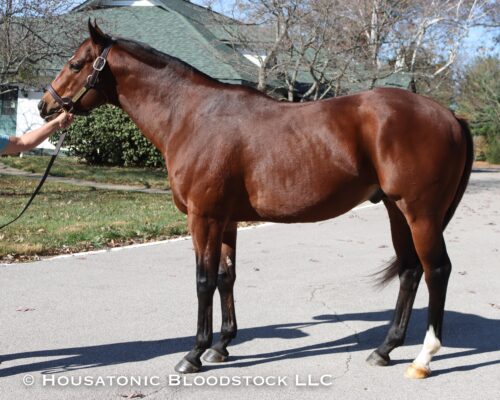 With Into Mischief about to lead both the General Sire List and the Juvenile Sire List for the fourth year in a row, his sons continue to be hot commodities as stallion prospects.  As a $425,000 weanling purchase by Shadwell Farm, who went on to be a TDN Rising Star first-time out and thereafter a stakes winner on both dirt and turf, Mutasaabeq has plenty going for him and intrigues as he enters stud at Darby Dan Farm in 2023 for a live foal fee of $7,500.

Trained by Todd Pletcher, Mutasaabeq debuted with a 4-1/2 length win going 5-1/2 furlongs at Saratoga, earning the TDN Rising Star badge.  He came back to be 3rd in the G1 Hopeful (also on dirt), then scored in the G2 Bourbon Stakes at Keeneland in his turf and two-turn debut.  Off the board with a troubled trip in the G1 Breeders’ Cup Juvenile Turf, Mutasaabeq returned to dirt with a victory in the Mucho Macho Man Stakes going a mile at Gulfstream in his 3YO debut.  Unfortunately, he went to the sidelines after that race for over a year, and was unsuccessful in one allowance try as a 4YO before his retirement.

Mutasaabeq’s winning Scat Daddy dam, Downside Scenario, is a half to the GSW sprinter Cool Cowboy, and to the dam of 2022 G1 Florida Derby winner White Abarrio.  As one would infer from his strong sales price, Mutasaabeq is a very well-made, attractive horse — very much in the Into Mischief mold with plenty of size and substance to him.  That, combined with his precocity and versatility, should give him a big shot to make it at stud.

Mutasaabeq wins the G2 Bourbon at 2YO

Mutasaabeq wins the Mucho Macho Man Stakes on dirt at 3YO