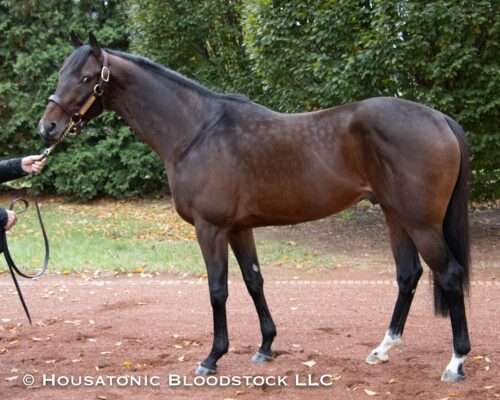 Raging Bull (by Dark Angel out of Rosa Bonheur, by Mr. Greeley) was a European yearling purchase by Peter Brant, and under the tutelage of Chad Brown he became a 3-time G1 winner in the USA, at 3, 5 and 6YO.

After breaking his maiden first-time out at Keeneland in the spring of his sophomore season, Raging Bull would go on to take 5 of 7 starts that year, including the G1 Hollywood Derby, G2 National Museum of Racing Hall of Fame, and G3 Saranac.  Placed in 3 more G1s at 4 including the Manhattan, Fourstardave and Woodbine Mile, Raging Bull kicked off his 5YO campaign with a runaway win in the G1 Shoemaker Mile.  He placed in the G1 Maker’s Mark Mile and G1 Shadwell Turf Mile later that year, and then returned at 6YO to take the G1 Maker’s Mark Mile off the bench.  He also placed in the G1 Woodbine Mile again later that season.

Described by Chad Brown as “the best-looking horse I have ever trained”, Raging Bull is a son of leading Irish stallion Dark Angel,  renowned as a speed and precocity influence, out of a mare by the very fast American sprinter Mr. Greeley.  He enters stud in 2021 for an advertised fee of $10,000.  You can see his page on the Gainesway website here.