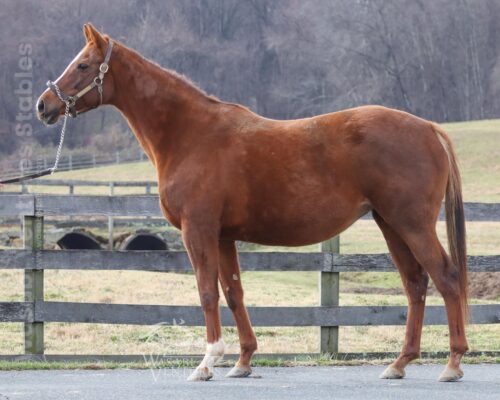 Yesshewill brings an incredible pedigree to the breeding shed.

Purchased for $20,000 at the 2021 Keeneland November Sale, she is not only a daughter of the leading racehorse, leading sire, and leading broodmare sire Giant’s Causeway (whose daughters have produced no fewer than 169 stakes winners, led by the likes of Gun Runner), but Yesshewill is a half-sister to no fewer than FOUR stakes winners (including a G1 winner, a G2 winner, and a G3 winner) plus two additional stakes producing sisters, one of whom is the dam of a multiple champion runner.

Yesshewill’s half-brother Stormello (by Stormy Atlantic, a son of Storm Cat just like Giant’s Causeway) won the G1 Hollywood Futurity and G2 Norfolk at 2YO, while My Best Brother (also by Stormy Atlantic) won the G2 Del Mar Derby on turf at 3. Gala Award (by Bernardini) won the G3 Palm Beach Stakes on turf at 3, while Cherry Lodge (also by Bernardini) was a turf sprint stakes winner and placed in the G1 Spinaway on dirt at 2YO (and now has her first two foals on the ground by the likes of Quality Road and Curlin). Yesshewill’s full-brother Greatest Game was G3-placed at 2, while her winning half-sister Atlantic Voyage (by Stormy Atlantic) is the dam of Canadian champion 2YO and 3YO filly Curlin’s Voyage (by Curlin) and the stakes-placed Brass Compass (by Malibu Moon). Finally, her half-sister Ever So Pretty (by Stormy Atlantic) is the dam of 2YO stakes-placed winner Barbarossa (by More Than Ready).

Yesshewill’s first foal is the Dialed In gelding Call Me Later, who has earned over $100,000 in his racing career so far, and her 3YO of 2023 is an Uncle Mo filly named Noshewont who is placed.  Yesshewill produced a big, gorgeous Maryland-bred filly from the first crop of G1 winner Rock Your World in January of 2023 (you can read about that Housatonic Recommended Mating here).