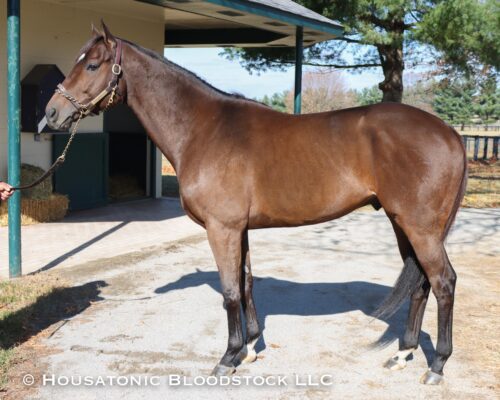 Aloha West went from unraced maiden to Breeders’ Cup Sprint-G1 winner as a 4YO for trainer Wayne Catalano, and that innate speed, class and ability make him a fascinating stallion prospect who will enter stud in 2023 at Mill Ridge Farm.

Bred in Maryland by Katy Voss and Bob Manfuso, Aloha West was purchased for $160,000 as a Keeneland September yearling by Ben Glass for Gary and Mary West.  Sent to trainer Bob Baffert, Aloha West ripped off six bullet works as a 2YO in California and was considered to be one of Baffert’s best juveniles that year before being sent to the sidelines.  More top works followed early in his 3YO season before Aloha West was eventually switched to trainer Wayne Catalano’s barn and scored first-time out in February of his 4YO year at Oaklawn going 6 furlongs.  He would progress to take a 7 furlong Churchill allowance by 5 lengths, and a pair of allowance races at Saratoga that summer at 6 and 7 furlongs.  Second, beaten just a neck, in the G2 Phoenix at Keeneland in his graded stakes debut, Aloha West then ran down G1 winner Dr. Schivel by a nose to take the G1 Breeders’ Cup Sprint at Del Mar with Eclipse Champion Jackie’s Warrior further back in the field.  Returned to the races as a 5YO, Aloha West was 3rd in the G1 Churchill Downs Handicap, and scored a gutsy victory in Churchill’s Kelly’s Landing Stakes.

A son of the brilliant G1 winner and hugely proven stallion Hard Spun, Aloha West is out of a G3 winning daughter of Eclipse Champion Sprinter and leading sire Speightstown, whose looks and tendencies he favors.  He will stand at Mill Ridge, who recently returned to the stallion business with the exciting young sire Oscar Performance and have turned him into a leading first-crop stallion with the help of their dedicated clientele, despite that horse’s accomplishments strictly as a turf horse.  We think that they can fashion similar success for Aloha West, and are excited to be along for the ride.