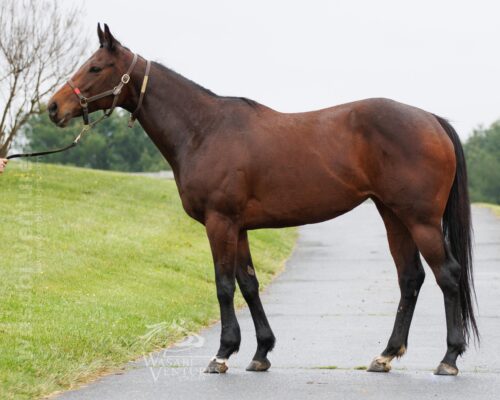 Buff’s In Love raced 44 times from 2YO through 6YO, winning 5 races and placing another 13 times, for total earnings of $221,477.  Her victories came in her juvenile debut at 5-1/2 furlongs (by 4-1/2 lengths, becoming the first winner for her sire, Buffum), and then in optional claiming races at 5 furlongs (as a 3YO at Delaware and as a 6YO at Pimlico) and 5-1/2 furlongs (as a 4YO on turf at Monmouth), and a claimer going 5 furlongs on turf at the Meadowlands in her second-to-last career start.  Though her wins all came sprinting, she had enough class and stamina to finish 3rd going as far as 7-1/2 furlongs.

As mentioned, Buff’s In Love was the very first winner for her late Maryland-based sire, Buffum (and she was also his very first foal, being born January 31st).  A $1.2 million yearling by Bernardini and out of a stakes-winning Storm Cat mare whose own dam is the Blue Hen Stick To Beauty (she the ancestress of Sky Beauty, Dayjur, Maplejinsky, Violence, Pleasant Home, Point of Entry, etc), Buffum went on to be a G3-winning sprinter on the track, and as a stallion got excellent results from very limited opportunities before his death in 2019.  Included among his offspring were winners of both 2YO Maryland Million stakes in 2021 (Buff My Boots and Buff Hello).

Buff’s In Love was acquired privately at the conclusion of her racing career as a broodmare prospect.  For her first mating, she will visit Alternation in 2022.