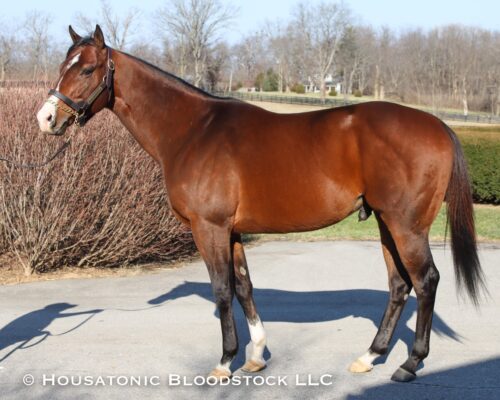 With Into Mischief about to lead both the General Sire List and the Juvenile Sire List for the fourth year in a row, his sons continue to be hot commodities as stallion prospects — and Highly Motivated is as intriguing as any of them entering stud at Airdrie in 2023 for a live foal fee of $7,500.

A $240,000 weanling purchase by noted bloodstock agent Mike Ryan, who called the colt a “stone runner” and a “must have”, Highly Motivated broke his maiden for trainer Chad Brown as a 2YO at Belmont over eventual G1 Florida Derby winner Known Agenda, then scored impressively in the Nyquist Stakes on the Breeders’ Cup undercard, setting a new Keeneland track record for 6-1/2 furlongs and earning a 96 Beyer Speed Figure (the second highest for a 2YO that season behind only Jackie’s Warrior).  Freshened for a Triple Crown campaign, Highly Motivated was 3rd in the G3 Gotham, then ran dual Eclipse Champion Essential Quality to a neck when 2nd in the G2 Blue Grass.  Off the board in the Derby, he was off the rest of the year and returned at 4YO to take a one mile allowance at Belmont, then set a new track record of 1:46.2 for 1-1/8 miles at Monmouth in the G3 Monmouth Cup, prior to a close 2nd in the G3 Iselin (giving 6lbs to the winner) in his career finale.

Chad Brown called him “the best colt in our barn at 2 and 3”, and he had the figures to prove it.  Highly Motivated is also a big, scopey, strapping son of Into Mischief and it’s easy to see why Mike Ryan was so high on him as a foal.  Out of a SW daughter of the G1W Warrior’s Reward, Highly Motivated is bred on one of the strongest crosses for Into Mischief.

Given his stunning physical and his top class racing quality, Highly Motivated should be poised to be a highly important stallion at one of the best stud farms in Kentucky.

Highly Motivated wins the Nyquist Stakes at 2YO in NTR time