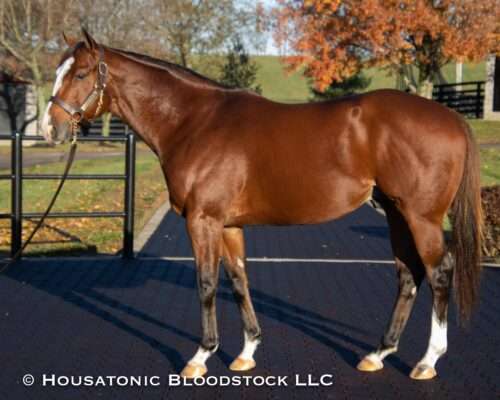 A $1.2 million 2YO in-training purchase, Instagrand went on to win each of his first two starts later that season by 10 lengths for trainer Jerry Hollendorfer and Larry Best’s OXO Equine.  Subsequently Grade 1-placed on the Derby trail at 3, he’s the most precocious son of his sire Into Mischief, who recently completed his ascendancy to the top of the U.S. stallion ranks as the 2019 Leading General Sire and Leading Juvenile Sire, and added a classic winner to his resume in 2020 with likely Horse of the Year Authentic.

Originally a $190,000 yearling buy before dropping the hammer for a sales-topping $1.2 million at the boutique Gulfstream 2YO sale after a :10 flat breeze (becoming Into Mischief’s first seven-figure sales horse), Instagrand earned TDN Rising Star status for his “jaw dropping” debut romp at Los Al going 5 furlongs (just missing the track record), then was even more impressive taking the G2 Best Pal Stakes over 6 furlongs at Del Mar in his second start when never asked to run but still able to finish his final quarter-mile in under 24 seconds.  Put away after that until he returned with a 3rd-place finish in the one-mile G3 Gotham the next spring, which preceded a strong 3rd in the 1-1/8-mile G1 Santa Anita Derby, Instagrand never again demonstrated that early brilliance while running through his 4YO season, ending with a (9) 2-0-3 record and $316,760 in earnings.

Still, that initial impression is hard to ignore, as is Instagrand’s powerful physique — both of which give us every reason to think that he can be a successful stallion for OXO at Taylor Made Farm where he retires for 2021.

Instagrand wins by a pole first time out at 2

Instagrand breezes a bullet :10 flat before selling for $1.2 million