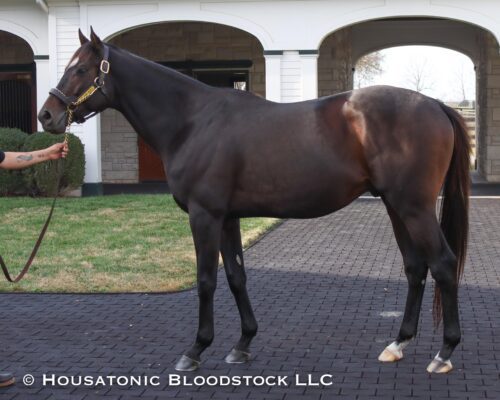 Rock Your World proved himself a brilliant and versatile performer despite a truncated racing career.  Given the combination of those traits, along with his excellent pedigree and gorgeous physical, we’re excited to have a client participating in the “Share the Upside” program with him at Spendthrift Farm.

As a $650,000 yearling purchase by David Ingordo, Rock Your World’s looks go without saying — but he has all the leg and length you’d want in a classic prospect.  Nevertheless, with versatility the hallmark of his female family, Rock Your World debuted sprinting on turf for trainer John Sadler on New Year’s Day of his sophomore season — and did so extremely successfully.  He stretched out to take the one mile Pasadena Stakes in his second start, again on turf, and then switched to dirt to score wire-to-wire in the G1 Santa Anita Derby over subsequent Kentucky Derby winner Medina Spirit.  His Beyer of 100 for that latter win was the fastest of any Derby contender heading into the race, and he was highly fancied for the Derby and then the Belmont, though he had a tough trip in the former.  After a summer freshening, Rock Your World returned to run 2nd to Medina Spirit in the Shared Belief Stakes on dirt, then was retired after the G2 Oak Tree Derby.

Bred by Hall of Fame trainer Ron McNally from a female family he’d cultivated for four generations, Rock Your World is a son of successful sire-of-sires Candy Ride (Gun Runner, Twirling Candy, Unified, etc), and similarly-bred to that one’s son Gun Runner (RYW out of an Empire Maker mare with a second dam by Giant’s Causeway, while Gun Runner is out of a Giant’s Causeway mare with a second dam by Quiet American (grandsire of Empire Maker)).

Rock Your World wins the Pasadena Stakes in his second start