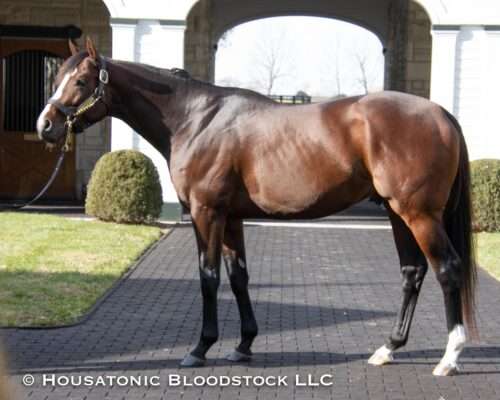 Thousand Words (by Pioneerof the Nile out of Pomeroy’s Pistol, by Pomeroy) was a $1 million yearling purchase who went on to an undefeated 2YO campaign for trainer Bob Baffert, then scored a pair of victories on the Kentucky Derby trail as a 3YO.  Though he always left the impression that he may have had more to give, Thousand Words accomplished plenty on the track to justify a chance at stud, and we’re excited to have recommended him as a Share the Upside candidate at Spendthrift for clients.

Thousand Words is a member of the first crop sired by Pioneerof the Nile that was conceived after American Pharoah’s Triple Crown campaign (at a stud fee of $125,000) and his dam was a very speedy graded stakes-winning 3 and 4YO — so fireworks were not unexpected for him as a Keeneland September yearling, and he duly delivered when bringing $1 million from the partnership of Albaugh Family Stables and Spendthrift Farm.

Sent to trainer Bob Baffert, Thousand Words broke his maiden first-time out a year later as a 2YO, gaining a 3/4-length victory going 6-1/2 furlongs at Santa Anita that October.  Stretched right out to 1-1/16 miles and stepped up to grade 2 company for his second start in the Los Al Futurity, Thousand Words showed gameness to battle back after being passed in the stretch by Anneau d’Or (who was coming off a close 2nd-place finish in the Breeders’ Cup Juvenile) and earned the hard-fought victory by a neck, with his graded-winning stablemate High Velocity back in 3rd.

Thousand Words then ran his record to 3-for-3 in his 3YO debut when he muscled his way between rivals at the top of the stretch to take the grade 3 Robert Lewis (which was also the 3,000th win of trainer Bob Baffert’s career).  Following the onset of Covid and its effects on the Derby trail calendar, Thousand Words tailed off a bit and got sour before Baffert gave him a freshening, then he returned with a decent 2nd in the grade 3 Los Al Derby to stablemate Uncle Chuck.  He proved he was as good as ever next-out, with a front-running victory over the highly-regarded grade 1 winner Honor AP in the Shared Belief Stakes at Del Mar in what was supposed to serve as a final prep for the September Derby.  Thousand Words showed his battling abilities yet again, digging in throughout the stretch to hold his three race rivals at bay all the way to the wire in another gutsy win.

Scratched after flipping in the paddock for the Kentucky Derby, Thousand Words wasn’t the same in up-the-track performances in the Preakness and the Malibu, and the decision was made to retire him to Spendthrift.

Given his physical conformation, racetrack quality, speedy female family and all-American, classic sire-line, we think Thousand Words makes an intriguing addition to the Spendthrift stallion roster for 2021, and it would be no surprise to see him have success at stud.